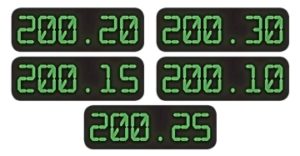 When looking for new scales, it’s important to familiarize yourself with three important words — accuracy, precision, and resolution. These terms are important descriptors of the properties of weighing scales, and although these terms have different and distinct meanings, they are often confused with one another.

When an object is placed on a scale, the scale reacts by displaying a measurement of the object’s weight. This “indicated weight” is generally recorded as the weight of the object. Our confidence in knowing how close the displayed weight is to the actual weight depends on our understanding of the scale’s accuracy, precision and resolution.

The accuracy of a scale is a measure of the degree of closeness of the average value of an object’s displayed weight to the object’s actual weight. If, on average, a scale indicates that a 200 lb reference weight weighs 200.20 lb, then the scale is accurate to within 0.20 lb in 200 lb, or 0.1%.

The precision of a scale is a measure of the repeatability of an object’s displayed weight for multiple weighings of the same object. For example, if the displayed weights of an object that weighs 200 lb are 200.20, 200.30, 200.15, 200.10, and 200.25 lb, then the average displayed weight is still 200.20 lb, but the measured values deviate by as much as 0.10 lb with respect to this average. Thus the precision is expressed as ±0.10 lb, meaning that the fluctuations are limited to 0.10 lb in either direction.

The resolution of a scale is the smallest increment in applied weight that can be detected or displayed on the scale. In all scales, this quantity is most affected by the number of digits that are displayed when an object is weighed.

In addition, resolution can also be affected by other factors such as friction, wear, and scale design. Most manufacturer sell sheets will publish a scale’s resolution, which is the smallest weight increments shown on the scale’s display, such as .2 lb / 0.1 kg. As we’ve learned above, these numbers are not related to the scale’s accuracy. Accuracy is usually shown as a percentage and illustrates how close the scale comes to measuring the true value of an object, such as 1% or ± 0.1 lb.

Accuracy, precision and resolution are different characteristics of weight measurements and should not be confused with one another. It is important that they not be used in isolation as a way to determine the quality or exactness of a scale’s output. Taken together, however, these properties are important tools in understanding a scale’s readings.