Editor’s Note: Whether selling a product, training hospital staff, or presenting to the board of directors, the quality of the presentation matters just as much as the content. Chris Anderson, president of TED – the nonprofit organization dedicated to spreading innovative ideas, and sponsor of worldwide TED conferences – recently published the book Ted Talks: The Official TED Guide to Public Speaking. In this continuing series, we offer some of Anderson’s main ideas to help make your next presentation an effective one. 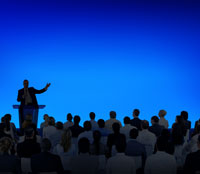 “You can give the most brilliant talk, with crystal-clear explanations and laser-sharp logic, but if you don’t first connect with the audience, it just won’t land,” writes Chris Anderson in the fifth chapter – “Connection” – of his book TED Talks: The Official TED Guide to Public Speaking. “To make an impact, there has to be human connection.”

Anderson offers several pieces of advice that may help you connect with – and consequently persuade – your audience the next time you have to make a presentation. Here are a few of them.

“Humans have evolved a sophisticated ability to read other people by looking at their eyes,” notes Anderson. Scientific findings indicate that when two people stare at each other, their brains’ mirror neurons are triggered so that each can adopt the other’s emotional state. “We look at each other, and our minds sync.”

The depth of that connection is determined in part by how much we instinctively trust each other. “The best tool to engender that trust? A smile.” Anderson recommends speakers make early connection with their audiences by walking confidently onto the stage, making eye contact with two or three people, and smiling.

“When you walk onto the stage, you should be thinking about one thing: your true excitement at the chance to share your passion with the people sitting right there a few feet from you. Don’t rush in with your opening sentence. Walk into the light, pick out a couple of people, look them in the eye, nod a greeting, and smile.”

“One of the best ways to disarm an audience is to first reveal your own vulnerability,” begins Anderson. “It’s the equivalent of the tough cowboy walking into a saloon and holding his coat wide open to reveal no weapons. Everyone relaxes.”

To illustrate the power of vulnerability, he recounts a 2001 TED Talk presented by the late surgeon Sherwin Nuland, discussing electroshock therapy.

“He was knowledgeable and funny, and he made it all seem interesting….But then he stopped. ‘Why am I telling you this story at this meeting?’”

Nuland then talked about his own struggle with debilitating depression, which was treated, as a last resort, by electroshock therapy, a technique that ended up working. According to Anderson, “By making himself so deeply vulnerable to the audience, he was able to end his talk with extraordinary power.”

He also observes that this technique – showing vulnerability – can help speakers battle nerves, by getting the audience on their side: “If you feel yourself choking up, then pause…pick up a bottle of water, take a sip, and just say what you’re feeling. ‘Hang in there a moment…As you can see, I’m feeling a little nervous here. Normal service will be restored soon.’ Likely as not, you’ll get a warm round of applause, and a crowd dying for you to succeed.”

Once again, though, a word of warning is attached. Simply put, there is a line between showing vulnerability and merely oversharing, which can turn an audience against a speaker. Anderson quotes speaker Brené Brown: “The best way I’ve found to get clear on this is to really examine our intentions. Is sharing done in service of the work on stage or is it a way to work through our own stuff? The former is powerful, the latter damages the confidence people have in us.”

“Authentic vulnerability is powerful. Oversharing is not,” says Anderson.

Make ‘em laugh – but not squirm!
It can be difficult for an audience to concentrate on a talk. But “[h]umor hacks away the main resistance to listening to a talk,” says Anderson. “By offering little gifts of laughter from the start, you are subtly informing your audience … Come along for the ride, dear friends. It’s going to be a treat.”

By inserting moments of laughter early in the talk, Anderson says, the speaker develops the all-important audience connection. “Laughter says, We as a group have bonded with this speaker. Everyone then pays more attention.”

But as with the first two tools listed in this section, humor must be handled with care. As Anderson puts it, “Humor is a skilled art …. Ineffective humor is worse than no humor at all.” Rather than trying to tell jokes, he recommends speakers tell “hilarious-but-true stories that are directly relevant to your topic or are an endearing, humorous use of language.”

And one more thought: “Thirty years ago, speakers packed their talks with jokes based on gender, race, and disability. Don’t go there! The world has changed.”

Park your ego
“Nothing damages the prospects of a talk more than the sense that the speaker is a blowhard,” says Anderson. “And if that happens early on…look out.”

His example is a TED Talk in which the speaker began, “Before I became a living brand…” “And there, right there, you knew it wasn’t going to end well.”

In fact, he says, audiences seem to like when speakers go the opposite direction: using humor to land a blow to their ego. “Self-deprecation, in the right hands, is a beautiful thing.” He offers a story of a TED Talk given by Tony Blair prior to his election as British prime minister, “which, [Blair] said apologetically, might make people worry whether he was qualified to govern.”

Anderson turns to TED speaker Salman Khan for a piece of advice:

“Be yourself. The worst talks are the ones where someone is trying to be someone they aren’t. If you are generally goofy, then be goofy. If you are emotional, then be emotional. The one exception to that is if you are arrogant and self-centered. Then you should definitely pretend to be someone else.”

Tell a story
According to Anderson, stories “can brilliantly establish the context of a talk and make people care about a topic.” He uses Ernesto Sirolli, PhD., and a 2012 TED speaker, as an example. In his talk, Sirolli discussed improving development aid in Africa.

“If you’re going to take on a tough subject like that, it’s a very good idea to connect with the audience first,” says Anderson. “When you can pull together humor, self-deprecation, and insight into a single story, you have yourself a winning start.”

The caution here is not to turn people off with your story, which, if not tackled appropriately, could come across as boastful or emotionally manipulative. “When you explain the amazing way you turned a problem into a thrilling success, far from connecting, you may actually turn people off….

“The guideline here,” he says, “is just to be authentic.”

The trusted friend
While Anderson does not make this idea a section of its own here, the “trusted friend” arises throughout the chapter, and throughout the entire book. Whether you’re trying to determine if your vulnerability reads authentically, or whether your ego seems truly in check, or whether the story you tell seems honest enough, Anderson recommends presenting your talk to a friend you trust.

“Every leader needs someone she can count on for raw, honest feedback. Someone who’s not afraid to upset or offend if need be. If you’re feeling proud of what you’ve recently accomplished, it’s important to try out your talk on that trusted person, and then give them the chance to say, ‘That was great in parts. But honestly? You come over a little full of yourself.’”