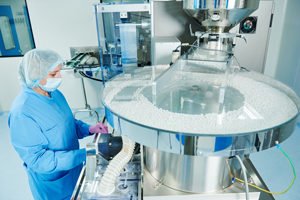 Supply chain executives aren’t the only ones feeling the heat about the rising costs of providing healthcare. Ask your pharmacy director.

Pharmaceutical prices keep going up, not simply because of rapscallions who jack up their prices simply because they can, but because of all the Rx advances being made today, such as those in antineoplastics, or anti-cancer drugs.

And on the horizon is so-called “personalized medicine,” using genomics. This summer, the U.S. Food and Drug Administration approved a type of immunotherapy called CAR-T cell therapy for kids and young adults with B-cell acute lymphoblastic leukemia, the most common childhood cancer in the United States. Immunotherapy harnesses the natural ability of the body’s own immune cells to attack and kill tumor cells.

The drug, Kymriah, is marketed by Novartis. The catch? Treatment with Kymriah can cost close to half a million dollars.

GPO pharmacy programs are nothing new. But more recently, pharmacy directors – like their supply chain counterparts – are banding together (often under the auspices of a national GPO) to form super-committed regional purchasing coalitions. A case in point is the Mountain States Pharmacy Network, one of 13 Vizient pharmacy networks.

Lessons from Billings
Vizient’s Ed Kent, executive director for Mountain States Pharmacy Network, joined the company in 2008 with more than 10 years of pharmacy experience – including director of pharmacy services – at Billings Clinic in Montana. His years at Billings Clinic made him well-qualified to kick off and grow the pharmacy network.

“During my time there, we morphed, expanded and integrated clinical pharmacy services into all aspects of care delivery across the organization,” he says of his Billings Clinic experience. “We also grew our geographic pharmacy footprint to a 500-mile east-to-west region.”

In so doing, he picked up some important lessons:

At Billings Clinic, Kent was part of an initiative that led to the formation of a steering committee of pharmacy directors who worked together with what was then VHA to establish the first network to standardize to one pharmacy distributor. “This brought immediate and significant improvement in both cost reduction and improved service to all hospitals in the network,” he says.

Later, as chair of the Mountain States Pharmacy Council, he proposed forming a virtual integrated pharmacy network. “The network was not defined by common ownership, but by our collective market performance. By standardizing our medication formularies and aligning with strategic supply partners – both manufacturers and distributors – we were able to create economies of scale, generating unique value for all partners, with hospitals being rewarded in the form of additional upfront discounts, backend rebates, and improved service. These incentives were facilitated and sustained by our hospitals’ ability to commit and rapidly convert super-system aggregated sales volume and market share that otherwise would never have occurred naturally.”

In April 2008, the Mountain States Pharmacy Council decided to hire a full-time Performance Services pharmacy consultant to drive initiatives for the network. Kent assumed the position in October 2008.

The network faced its share of challenges in the first years – challenges that may sound familiar to supply chain executives building regional purchasing coalitions for med/surg products.

“Initially, we needed to define our ‘brand’ with suppliers in the marketplace,” says Kent. “We needed to demonstrate to both suppliers and distributors that we were, in fact, an ‘integrated delivery network,’ defined not by common ownership, but instead by our collective performance honoring our commitment to convert super-system aggregated volume and huge shifts in market share that otherwise would not be possible.”

As executive director for Mountain States Pharmacy Network, Kent represents and manages the members’ best interests with all key stakeholders. “I interact with the supplier, GPO (contracting and legal review), and the distributor so that each member has access to the necessary supplies, is paying the correct super-tier contract price and is purchasing those medications that offer the most value. By actively identifying opportunities, assessing the potential for savings and providing critical market management, I align all interests to their collective benefit.”

In addition, he “provides peer-to-peer connections, comparisons for benchmarking, and other data necessary to gain physician acceptance and overcome barriers to change and speed to adoption by sharing what has worked for other hospitals.”

Since its inception, Mountain States members have saved more than $150 million annually.

Multi-network approach
A growing majority of the network’s contracts are now, in fact, multi-network in nature. And with good reason, says Kent.

“With more than 750 members, that means that we have over 1,500 dedicated and highly collaborative pharmacy directors, clinical managers, pharmacy analysts, and pharmacy buyers identifying potential savings opportunities to our network directors. This increases the speed to value for all network members. In addition, we are able to use a crowd-sourcing approach when there are drug shortages to benefit our network members.”

Challenges of personalized medicine
Medicine continues to advance, but there is – literally – a price to pay. Providers and suppliers will adapt accordingly, says Kent.

“Manufacturers are developing new specialty life-sustaining and life-improving medications for cancer, neurological disease, heart disease and orphan indications, but many of these agents are so incredibly expensive that few will be able to afford the deductibles and copays,” he says.

“In one form or another, personalized medicine is a reality in cancer, hepatitis C and AIDS treatments today. Due to the increased understanding of our genome, receptor sites, critical enzymes and proteins, the role of pharmacogenomics has become truly remarkable.

“I believe we will soon see most specialty medications being co-marketed and patented with a genotype test to determine whether that expensive agent is worth the $150,000 to $250,000 annual treatment cost.

“We can start to move things in the right direction by choosing a value-based formulary of medications that will increase the availability of cost-effective, quality care.”

In addition, “pharmacy networks will continue to focus on sharing standards and best practices. Members will share those medications, tests, technologies, and supply partners that will maximize the value equation for our patients and their health systems.”

At the same time, pharmacy directors will be expected to play a bigger role in what has come to be called population health, or the continuum of care, says Kent.

“One of our primary goals is to empower and encourage our pharmacy directors and clinical managers to break down silos, improve the transitions of care and increase access to affordable, quality care across their health systems; whether it be inside or outside their four walls. For example, when the hospital pharmacy department is given ownership of all aspects of medication management, just by optimizing the site of care for drug delivery, they are able to substantially decrease cost, improve utilization, enhance patient access and increase revenue.”