The chance of a lifetime for one supply chain executive

Editor’s note: In the fall of 1997, leaders across the Intermountain Health system in Salt Lake City received a memo seeking a candidate to coordinate the volunteer medical program for the 2002 Winter Olympics, to be held in Salt Lake City. Intermountain had committed to taking full responsibility for the medical and doping control program.

“Who would have known the depth and breadth of this role and what an amazing opportunity this would be?” asks Ginny Borncamp, who at the time was leading supply chain product strategies at Intermountain. “On the other hand, you’d have to wonder why the position was posted four years ahead of the Games,” says Borncamp, who today is senior vice president, chief sourcing officer, Providence St. Joseph Health, Renton, Wash. As the 23rd Winter Olympic Games unfold in South Korea, now seems like a good time to hear her story about what happened 20 years ago. 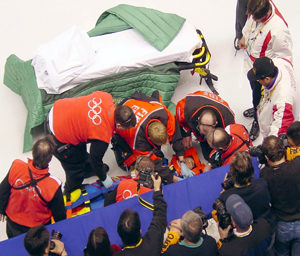 When “the letter” came, I was working with the supply chain team at Intermountain’s system office. I just loved that job, but after the entire city’s excitement of winning the bid for the Games, the chance of working with the Salt Lake Organizing Committee for the 2002 Olympics and Paralympic (SLOC) seemed like an adventure I should consider pursuing. Of course, when I submitted my name for the job, I had little understanding of the full scope of the role. The director of the medical program was merely described as the “coordinator of medical volunteers” for the 2002 Olympics and Paralympic Winter Games. I’d had the opportunity to work with a number of amazing volunteer organizations in earlier years, and just that aspect was thoroughly enticing.

This role came with no instructions and led to a journey defining the requirements, finding incredibly passionate and talented clinical and operational leaders, and working with a team of skilled and enthusiastic volunteers. The opportunity to 1) collaborate with the chief medical officers from all the National Olympic Committees (NOCs), such as the US Olympic Committee or the Austrian Olympic Committee; 2) understand the varying medical care requirements of each International Federation of Sport; and 3) work with the recently formed WADA (World Anti-Doping Agency), the FBI & Homeland Security, the FDA and USDA, eight fire district emergency response organizations, the Utah Department of Health for licensing of clinicians/facilities, epidemiology…. the list goes on. As you can see, this grew to be the chance of a lifetime.

Why a supply chain exec?
Though some might wonder how my experience in supply chain management made me a strong candidate for this role, many in our industry understand how the breadth of supply chain relationships and experience with needs assessment could be keys to success. After all, needs assessment is just a beginning to researching options and, most important, facilitating consensus-building among groups of people with often competing goals.

Additionally, as not-for-profits, both Intermountain and the Salt Lake Organizing Committee would be challenged to stretch every dollar invested in the medical and doping control program. And that is the core to the mission of every supply chain organization.

Four years prior to the Games, Intermountain and SLOC filled the chief medical officer and director roles. Dr. Charles Rich and I moved forward with planning activities through the first year. We started building a team that would ultimately include medical directors of the Olympic and Paralympic Village polyclinic and the SLOC doping control lab; venue medical and doping control officers for each training and competition site; and operations leaders, including certified athletic trainers, physical therapists, nurses, ski patrol and administrative staff. Pre-Games activities included:

One year prior to the Games, each Olympic Host City holds an IOC Medical Commission-sponsored international scientific conference for sport medicine and biomechanics. This, in itself, is quite an endeavor – hosting a three-day event for medical, sport scientists and biomechanists from across the world. We had a terrific program agenda, but unfortunately, our event was scheduled for Sept. 12 to Sept. 15, 2001 – yes, the day after 9/11. With no air transportation available, the meeting was cancelled and rescheduled for the year following the Games. You can’t imagine how 9/11 impacted the security aspects for the Games, including disaster preparedness at a seriously escalated level.

While engaged in planning, we were also responsible for staffing and provisioning two years of “test events,” i.e. World Cup and Paralympic events including figure skating; luge/bobsled/skeleton; freestyle, Nordic and Alpine skiing; ski jumping; snowboarding and hockey. We also participated in a number of “observation events,” providing the opportunity to study back-of-house operations of the Nagano (Japan) and Sydney (Australia) Olympic Games, and a number of domestic and international World Cup events. While my focus was on medical and doping control operations, there were 40 other functions in Olympic Organizing Committees, so these observations were busy trips!

Throughout the planning period, we were inspected by and/or gave presentations to the IOC, to medical officers of each National Olympic Committee and International Federation of Sport, and to local, state and federal regulatory agencies. My team was absolutely fantastic, and we received kudos all along the way.

The Games begin
During the Games we provided a comprehensive medical program:

While pulling together 1,300 medical volunteers for these five or six weeks, we had to ensure that healthcare to our community members remained seamless and accessible. A collaborative bond grew across all the agencies involved in planning, and this commitment ensured the flexibility we would need to respond to whatever community healthcare needs arose during the Games.

After the Games
As an “executive on loan” from Intermountain, I remained employed by Intermountain for the entire four-year period. After the Games, SLOC nearly vanished overnight. With months to build-out, the venues came down in days. All but a small core of operations leaders left within weeks. Those of us who stayed drafted comprehensive after-action reporting. Part of my responsibilities included disposition of our medical and doping control equipment and supplies. While we had been able to lease (and return) the MRI and other radiology equipment, we had to buy (and then sell) two high-resolution mass spectrometers and other high-tech lab equipment that were used in the doping control lab.

Following closure activities for SLOC, I had a terrific opportunity to join the medical informatics department at Intermountain as a project manager/product manager for some meaningful projects. The product manager role focused on bringing the internally developed EMR (electronic medical record) to non-employed physician practices in the community. Projects included development and management of a directory of all non-employed individuals who had authorized access to the EMR, and responsibility for implementing the systemwide credentialing and privileging program across Intermountain’s 22-hospital system.

When I asked the CIO why he recruited me for the position, he said that anyone who could pull together our Games’ medical program must have some pretty good project management skills. Of course, I had a whole team of committed professionals to help put our Olympic and Paralympic Games medical program together – and that is just what I encountered in this next role at Intermountain.

Learning experience
Almost every aspect of planning for the Olympics provided new information and insight. Some of the more unexpected learnings included the following.

Working on the Games held its share of surprises too.

2006 and 2010
All organizing committees are responsible for transfer of knowledge, or TOK, to the future host cities. It was our pleasure to partner with the chief medical officer from TOROC (Torino Organizing Committee) and their medical planning group as they experienced their own “observation events,” including our Olympic and Paralympic Games.

A remarkable aspect of working with an Olympic Organizing Committee (OOC) is that you develop an unusual area of expertise. This is true for the leaders of over 40 functional areas, including telecommunications, accreditation, food & beverage, security, sport, informatics, etc. I was honored when TOROC asked me to help develop their medical program for the 2006 Games.

In developing the program scope document, I learned a lot about the Piemonte region’s EMS system, the community hospital system, and some really impressive sports and primary care medical professionals. TOROC was especially fortunate in that our Intermountain team had provided precedent-setting Games’ medical care data, which was invaluable in developing staffing levels, equipment needs, and logistics planning for TOROC’s medical program. I worked with TOROC throughout their first three years of planning, and counted my blessings for the opportunity to help provide a good base for their last year of planning, test events, and final Games preparations.

During TOROC’s planning period, the International Olympic Committee decided to develop a comprehensive TOK program. I was one of a number of consultants asked to write the technical manual for a program area. This was a wonderful idea, and I was able to see the benefit of these TOK manuals in Vancouver (site of the 21st Winter Olympics in 2010).

The general manager of Sport for VANOC, Cathy Priestner-Allen, had been my “one-up” at SLOC. I was not able to join her in Vancouver as the director of the VANOC medical program, but was thrilled for the opportunity to draft the operations plan to help the medical team get started on their own journey of Games planning.