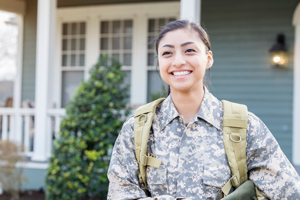 Carl Meyer believes that anyone who has invested his or her time and effort – not to mention risked their life – so the rest of us can enjoy our freedoms deserves to be at the front of the line for every job they’re qualified for. And Meyer – executive vice president with the national accounts consulting group The Wetrich Group – believes Hire Heroes USA is the best organization to help them do just that.

This summer, Meyer raised money for Alpharetta, Georgia-based Hire Heroes USA the way he does best – playing golf. In fact, since 2008, he has spent his Fourth of July holidays golfing in support of the national nonprofit dedicated to helping military members veterans and spouses find careers in the civilian workforce. Over the past 11 years, he has helped raise about $750,000.

“I feel so lucky to live in a country where there are men and women willing to put their lives on the line for us, that my spending some time to play some golf and mail letters to supporters of my efforts is just a very small way of trying to say thanks,” he says.

Veterans often fail to grasp the value of the skills they learned in the service, says Meyer. Hire Heroes USA helps them do so, and to communicate that value to prospective employers.

“Our core approach has not changed – we stay focused on helping each transitioning military member, veteran and military spouse that we work with to understand how to find a quality career. We do this through personal interaction; we assign them to a Transition Specialist, who works as a resume writer and job coach to empower them in their job search. We have added additional services over the last four years – such as federal resume help, industry expert career counseling, a robust job board – but we remain focused on each client and giving them the training and coaching they need to succeed.”

The biggest challenge facing many veterans is their lack of experience in the civilian job market. “They have a skills gap in how to create a resume, how to network, how to interview,” says Plamp. Furthermore, many HR professionals and hiring managers don’t understand what is on the typical veteran’s resume, so the veteran may not even get to the interview stage.

Often veterans need help talking about their military accomplishments in ways that advance their job search, says Plamp. For example, in the service, they learn that teamwork is all-important. “They will say, ‘It’s all about the unit,’ or ‘My squad did this,’” he says. “They don’t want to talk about their individual actions that contributed to the outcome. But in corporate America, job-seekers have to talk about what THEY did in prior positions and what THEY can do for the company.”

Hire Heroes USA Transition Specialists revamp their clients’ resumes accordingly. “There’s often a light bulb moment,” says Plamp. “The veterans read the revised resume and they go ‘Wow.’ Then we start talking to them about their elevator pitch. It gives them confidence.”

Veterans also have a tendency to downplay their experience working in extreme conditions with expensive technical tools. An example might be repairing an M1 Abrams battle tank by oneself in the Iraqi desert. “The thing is, in the service, everyone around you is doing something similar, so it doesn’t feel exceptional,” says Plamp. He likens it to elite athletes, such as NFL players. “When they’re playing, they’re surrounded by other players, but when they’re in public, it’s clear they are remarkable human beings.

“We teach our veterans to put themselves forward and to understand and be proud of their unique skill set.”

Landing a job
“Hire Heroes USA works hard to be aware of the trends and advise our clients on the changing job market,” says Plamp. “Last year, Amazon became our No. 1 commercial company that hired our clients, replicating trends that are occurring in corporate America.”

Many veterans are well-suited for jobs that call for self-motivation, a strong sense of responsibility and proficiency with technology, he says. “There’s a huge gap in the workforce for plumbers, electricians, professionals in 3D printing.” The service also offers some of the best leadership training, and many veterans quickly find their way into management posts.

It is estimated that 350,000 veterans are unemployed, many having given up looking for work altogether, says Plamp. What’s more, about 250,000 military members leave the military each year. Another issue is underemployment; many veterans are not working at the skill level or pay level they should be, given their experience and education. Many times that is due to their lack of experience navigating the civilian job market.

So the need for Hire Heroes USA – and Fourth of July golf – continues.

“We wouldn’t be living in the country we are today if not for the sacrifice of the people willing to raise their hands and serve,” says Meyer.