Teamwork and leadership on an NBA dance team 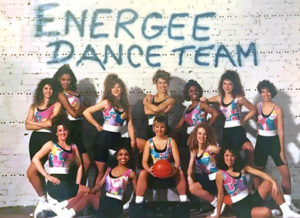 Lisa Fohey, supply chain director of deployment readiness for Advocate Aurora Health in Milwaukee, insists she’s not an athlete in the traditional sense of the word. Yes, she played soccer and ran cross country in high school. But she was always JV. “I won just one race, and that was because I was the only runner,” she recalls.

But she loves to be active. For example, in 1983, a friend opened an aerobics studio in Milwaukee and taught her how to be an instructor. “It was a match made in heaven,” says Fohey, who still teaches a couple of classes today. It was at that aerobics studio in 1990 that she learned about auditions for the Energee! Dance Team, which, at the time, was the official dance team of the NBA Milwaukee Bucks.

She was 27 and had never been trained as a dancer (though her mother has a photo of her daughter with 11 other three-year-olds in tutus, no two of whom are doing the same thing). But she thought learning hip-hop might be a blast. So she went to a couple of practice sessions before auditioning for the team one evening at the Italian Community Center in Milwaukee.

She recalls being “nervous as all heck” that evening, and fairly certain she wouldn’t make the team. But the atmosphere during the tryout was collegial. “We were all there to have a great time,” she says of the women who were auditioning. To her surprise, she was admitted to the team for the 1990-1991 basketball season, and danced through 1993. (She served as the team’s personal trainer and assistant coach for several years after that.)

It was a great time to be on the Energee! Team, she says. For one thing, the team was only in its second year, so expectations on the part of fans were still moderate. Yet at the same time, the basketball industry was waking up to the fact that games had to be more than games.

The quality of entertainment for fans – and ways to engage them – was beginning to come into play. For the Bucks, that meant introducing Streetlife (a band), Bango (the mascot) and of course, Energee! (They were to be followed by Hoop Troop, Juniorgee!, Seniorgee!, Flashmobs, Rim Rockers, Street Dancing team, a drumline and full production professional half time shows.)

Work/life balance
Being an Energee! Dancer was a challenge for Fohey’s work/life balance. She had a full-time day job as a logistics manager at Children’s Hospital in Milwaukee in addition to her aerobics gig. Energee! practice consumed up to eight hours a week. Add to that many hours of practice on her own. Because she wasn’t a trained dancer, Fohey got permission to videotape routines so she could study them at home. Occasionally she would sit on the sidelines during practice and take notes, then go to the aerobics studio for some practice time.

“It was absolutely a labor of love.”

Come game day, she and teammates would arrive a couple of hours early, learn the music, walk through their routines, and run through anything that needed fine-tuning. Dressed, with makeup applied and hair done, the women would wait in the tunnel to be called to the floor for their particular timeouts. “Some of us were nervous, others didn’t seem fazed at all,” she recalls. “I think it was just excited anticipation.”

Perhaps the coolest part of game days were the routines the team performed in the fourth quarter. As opposed to the earlier timeouts, the women were never sure what they were going to do when they came out onto the floor. The music would come on, the dancers would train their eyes on the leader, who would call the formation and routine using hand and arm signals.

“I really appreciate the things I learned from the coaches and choreographer,” she recalls. Director Lois Wagner Koepke had the ability to visualize the choreography from floor level as well as the top seats. “She was looking at what our arms were doing, what our legs were doing. It was kind of like artwork,” says Fohey.

Fohey still gets together with dance team alumni. Perhaps not surprisingly, quite a few of them have daughters of their own who dance or participate in gymnastics or general fitness activities.

Her friendships are just one thing she carries with her from Energee!. Another is her appreciation for strong leadership, such as the kind she experienced on the dance team. And closely related to that: Teamwork.

“We offered each other a lot of encouragement,” she says. “We wanted everyone to be able to do the routine as well as the next person.” She likens the dance team to a fighter jet formation. “We always had to be looking side to side, to the people next to us.

“I’m lucky that I have had a couple of really empowering experiences,” going all the way back to Girl Scouts. “I really value the friends I’ve made and the camaraderie.” And she enjoys hearing and reading their success stories. “Motivating and inspiring.”