Due to the lack of effective technologies in the past, pathogen circulation has been virtually unaddressed on the bottom of shoes and booties, as well as, to the transfer of pathogens from these reservoirs onto the floors. This lack of remediation leaves open the opportunity for organisms to enter or exit any one room (even after terminal or other disinfection interventions) and starts the process that leads to pathogen transmission. Regardless of what other products, technologies, and protocols are used, until now nothing has effectively killed the vast majority of pathogens on the soles of shoes and booties in order to lower overall microbial load.

HealthySole® Plus is the first and only 24/7-active, patented, UVC, chemical-free, and green technology that can be placed at every location throughout a healthcare facility in order to reduce the spread of pathogenic organisms. By implementing HealthySole® Plus, an infection control program will attack the one transmission vector that has been unaddressed in the past. The HealthySole® Plus has been independently and clinically tested (by several independent research groups) and proven to reduce health care-associated pathogens up to 99.9 percent from the soles of shoes in eight seconds. A clinical study titled “In-Vitro Evaluation of a Shoe-Sole Microbial Decontamination Device” was published and presented at the 2016 Texas American Society for Microbiology meeting in Dallas. This study observed a 2.31 (99+ percent) log reduction of Enterococcus faecalis in a randomized, blinded, 50 pair-of-shoe sample trial when using the HealthySole® Plus device. 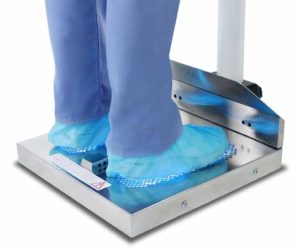 In a recently published (March 1, 2017) American Journal of Infection Control study titled “Are Hospital Floors an Underappreciated Reservoir for Transmission of Health Care-Associated Pathogens?” Abhishek Deshpande MD, PhD explains, “Floors are a potential source of transmission because they are often contacted by objects that are subsequently touched by hands (e.g., shoes and socks).” This study examined the potential for pathogens such as C-Diff, MRSA, and VRE to transfer from hospital room floors to hands in five Cleveland-area hospitals. One hundred and fifty-nine patient rooms were sampled in this study, resulting in high contamination of healthcare-associated pathogens on floors in both (CDI) isolation and non-isolation rooms. C-Diff was the most recovered pathogen in both types of rooms. More importantly, results showed that these organisms transferred to gloved and non-gloved hands from hightouch objects on the floors of these rooms (MRSA 18 percent, VRE 6 percent, C-Diff 3 percent).

Another breakthrough study titled “Evaluation of Hospital Floors as a Potential Source of Pathogen Dissemination Using a Nonpathogenic Virus as a Surrogate Marker” by Dr. Curtis Donskey highlights, “Hospital floors are frequently contacted by objects that are subsequently touched by hands (e.g., shoes, socks, slippers).” This study states that “a nonpathogenic virus inoculated onto floors (30X30 cm area of floor in each room) in hospital rooms disseminated rapidly to the footwear and hands of patients and to high-touch surfaces in the room. The virus was also frequently found on high-touch surfaces in adjacent rooms and at nursing stations. These results suggest that floors in hospital rooms could be an underappreciated source for dissemination of pathogens.”

The abundance of deadly organisms, as well as antibiotic-resistant “superbugs,” has Infection and Quality Control searching to find effective technologies above and beyond the traditional protocols of chemical disinfection. Healthcare-associated infections (HAIs) are responsible for up to 2 million infections and 99,000 deaths annually in the United States. Dr. Richard Lehman of the U.S. Center for Sports Medicine states, “Their number one complication is infection and that pathogens occur from the ground up. The HealthySole® Plus helps them eliminate up to 99.9 percent of the pathogens on their feet prior to entering the O.R. and helps decrease the number of wound infections in their athletes and patients.”

Shoe soles and booties are often the starting point of rapid microbial dissemination to hands, high-touch surfaces, aerosolization, and room-to-room. To achieve the greatest potential for success of an infection control program, healthcare facilities must address all main forms of pathogen transmission. Aggressively taking action against other vectors, such as hands, air and touch surfaces, while lacking attention to shoe soles as a vector, can be extremely deadly and very costly to patients and healthcare facilities.

In conjunction with other germicidal technologies, products, chemicals and protocols, HealthySole® Plus is the one and only product that prohibits shoe-borne organisms from becoming a severe danger. No other product can be substituted to achieve up to 99.9+ percent kill rates from 24/7-active disinfection of shoe soles that HealthySole® Plus is clinically proven in doing. Without the bundling of HealthySole® Plus, even the most proactive, modern, and cutting edge infection control programs in the world are leaving one of the main vectors for pathogen transmission untouched, allowing themselves to always be vulnerable to widespread infections.