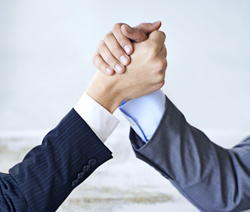 In many markets, hospital systems and independent urgent care operators compete fiercely for market share. But increasingly, the two are making the decision to approach the market in tandem, in the form of partnerships and joint ventures. Why? And who’s got more to gain? More to lose?

A panel of experts tackled the topic at the recent National Urgent Care Convention in Chicago, sponsored by the Urgent Care Association of America.

Why partner with a hospital?
Independent urgent care companies see two reasons for partnering with hospitals: growth and opportunity, said Jeff Ward, chairman of AppleCare Immediate Care, Brunswick, Ga. The independent operator may lack the name recognition of the hospital system, he said. Tapping into that recognition “is a great way to bring patients to your door.” What’s more, through its strong negotiating power, the hospital may enjoy more favorable reimbursement from commercial payers than the independent operator. And as hospitals form so-called “narrow networks,” the independent operator may find it difficult or impossible to capture market share on its own.

Ward is also the CEO of Tristan Medical, Raynham, Mass., which operates primary and urgent care centers. While Tristan is not currently active in a hospital joint venture, that approach is highly likely to be part of its future strategy, he said.

Tom Charland, founder and CEO, Merchant Medicine, Shoreview, Minn., pointed out that private-equity-backed urgent care operators who lack a familiar brand in a market may seek a partnership with a local hospital or hospital system in a order to “shorten the runway” to gaining a foothold with the local population. The independent operator can also benefit from the hospital’s long-standing marketing efforts in its community, and in so doing, direct some dollars that would have been invested in marketing to other endeavors, such as opening new centers.

What’s in it for the hospital?
But the benefits go both ways, according to the panelists. Hospitals are feeling a need to get into urgent care, and partnering with an independent operator may be the best way to do so.

“Low-acuity mass-market has all of a sudden become very strategic for hospital systems,” said Charland. Already, an estimated 25 to 30 percent of the nation’s hospitals operate at least one center, many driven by a sense of threat. Perhaps an independent urgent care operator, a competing hospital system or a private-equity-backed urgent care operator has entered the market. If a patient visits a competitor’s urgent care center, that patient may seek follow-up, “downstream” care from a competing practice or hospital, noted Charland. That “leakage” can lead to market share erosion.

Charland pointed to Optum’s recent decision to acquire MedExpress as a prime example of the threat facing hospitals wishing to capture a share of the urgent care market. MedExpress currently operates 141 full-service neighborhood medical centers in 11 states, and plans to accelerate its expansion by opening 25 to 30 additional centers in 2015 in states in which it currently operates as well as additional states. MedExpress centers are open 12 hours per day, seven days a week.

The competitive threat may explain IDNs’ desire to get into urgent care. But what about partnering with an independent operator?

Hospitals and hospital systems usually form joint ventures and partnerships because they want to – need to – move quickly, said Charland. “If they are capable of doing it on their own, and can have 100 percent equity, they should do that. But the truth of the matter is, they are not always capable of competing at the level of a nimble, private-equity-backed urgent care operator. Even with the best consultants on earth, a lot of hospital systems lack the depth or skill or people to move quickly. Therefore, they look at a joint venture.”

It’s a typical outsourcing decision, added Ward. “People are always looking to outsource what they aren’t expert at.” Operating an urgent care center may be simpler than operating an acute-care hospital, but the fact is, hospitals aren’t used to it. That’s why they seek help from independent operators. What’s more, in some markets (such as Savannah, Ga., where AppleCare has a presence), busy EDs are losing commercial patients to urgent care, as patients are increasingly unwilling to face the long wait times and expense of the typical emergency department. “So it’s catchment and control of the patient, and the desire to grow quickly,” he said.

One potential sticking point in partnerships between IDNs and independent urgent care operators? A lack of understanding and tolerance of each other’s cultures, according to panelists.

Hospital systems seek partnerships with competent urgent-care operators, who have an established track record, said Charland. Many non-hospital healthcare providers view hospitals, as large, clumsy, bureaucratic and slow to act. That attitude can negatively impact any potential partnership. “It would be nice if that operator understood the dynamics and complexity of the hospital system,” he said.

Even so, added Ward, “You have to strike a balance between understanding where [the hospital] is coming from, but not getting sucked up in it to a point where you lose sight of why you were engaged in the first place – which was to operate the center as the urgent care expert.”