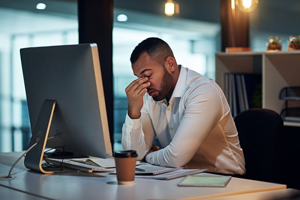 Traditional thinking tells us people don’t like change. But if that were true, no one would ever get married or have a baby. Or move, or go to college, or change jobs, or the myriad of other changes we humans regularly impose on ourselves.

People make huge sweeping changes every single day. They don’t do it because they’re forced to; they do it because they want to. The change people don’t like is change that is thrust upon us and that has no clear benefit for us.

In the work world, we often assume people’s resistance to new programs and ideas is because they can’t handle change. Often, intelligent people resist change because they don’t want to do a lot of work for something that does not matter to them.

A friend of mine, Gill, told me about how their company approached a recent reorganization. They held a big meeting to tell everyone about their plans. Senior leadership laid out the new structure. They discussed the efficiencies the company would gain, and how it would better them in the marketplace. Leadership closed by emphasizing the anticipated increase in earning and share price.

Gill attended the meeting with all his direct reports. His team was clearly less than delighted by the changes. They left the meeting grumbling, and by the time they got back to their area, the grumbles turned into full-throttled complaints. This is going to be soooo much work. This is pointless. I bet some consultant sold them on this.

After hearing the complaints, Gill thought, “HR told me this would probably happen. People don’t like change.” As a well-intentioned leader, he thought his job was to help people cope with the change. But the problem wasn’t that his people couldn’t handle change. The problem was the senior leaders hadn’t outlined any clear benefits for anyone other than shareholders. Meanwhile, people’s jobs and lives would be turned upside down.

It’s nice to think that everyone is all-in to improve the company. But it’s naïve to believe employees will happily jump through hoops to increase share price. Even when employees own stock in the company, dandling a potential future earnings increase doesn’t win hearts and minds.

Talk to any kid whose parents have divorced and they’ll tell you: making my life harder so your life can get better is not a change anyone in their mind gets excited about.

When people hear about a change, the first things they think are, why is this happening and how is this going to affect me?

In Gill’s case, he figured out quickly, he needed to level with people. The truth was, if the company didn’t change, their competition would clean their clock. Gill was also honest about how much work it was going to be. He said, “It’s going to be chaotic for the next month. Then for the month after, when we’re working out the kinks it will likely still be harder than normal. By month three things should start to get easier.”

When you sugarcoat things, people are less likely to trust you. Whether you’re telling your kids you’re moving, or telling your team the company is reorganizing, be honest. If it’s going to be hard, tell them.

People can and do adapt to change, especially when the leaders consider the team’s perspective.

Lisa Earle McLeod is a leading authority on leadership and the author of four books including the bestseller, Selling with Noble Purpose. Companies like Apple, Kimberly-Clark and Pfizer hire her to help them create passionate, purpose-driven organization. Her NSP is to help leaders drive revenue and do work that makes them proud.