Model of the Future 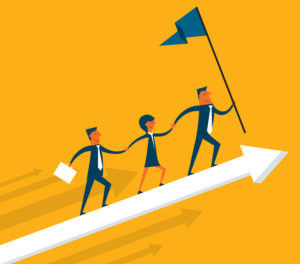 In many ways, Tyler Ross says his role as director of supply chain operations at Novant Health can feel like being an air traffic controller. There’s the supply chain goal of landing a new product or service onto the health system’s runway. Added to that task is input and feedback on the clinician side – which can range from surgeons to specialists to primary care physicians across countless sites. And, there’s the vendor itself to bring into the fold.

Ross says he tries to act as a conduit to guide the discussion between all the stakeholders and his sourcing team. “I say, ‘Here’s where we see an opportunity, here’s where we would like to drive value, and here’s how we’d like to implement.’ And then kind of go forth. So, in these kinds of situations, I do end up acting like a program manager in a lot of ways.”

Driven
Ross started in supply chain 10 years ago while serving as an officer in the U.S. Marine Corps. He said he was fortunate to be given the opportunity to become a logistics officer, which dictated his career path while in the Marines.

“I spent five years there,” he says. “I really enjoyed the concept of providing logistics support to disparate locations across what we would call the battle space – across large areas of territory – and thought it was an interesting challenge and something that I wanted to continue to pursue as a civilian.”

After Ross was honorably discharged from the Marines, he joined Novant Health in Wilmington, N.C., as a supply chain manager at one of Novant Health’s facilities. Ross was promoted a few years ago to his current role, with a focus of looking at Novant Health and how it is growing into the non-acute space at a rapid pace. He says he enjoys the challenge non-acute presents, as well as the fulfillment and satisfaction gained from knowing everything is directed towards patient satisfaction and patient care.

“That’s really been what has driven me to this specific niche within healthcare supply chain,” Ross says.

Talking about the basics
Novant Health has 15 hospitals in its system, 600-plus clinics and 12 outpatient surgery centers throughout four states including Virginia, North Carolina, South Carolina and Georgia. It approaches anything outside of the standard acute care and medical center setting as what it considers non-acute.

“So that entails a culture change in supply chain for us from how we view distribution efficiency and how we’ve used supply chain support,” Ross says.

Traditionally, healthcare supply chain focused on bulk ordering and bulk logistics processes going from a central distribution center or distributor to the loading dock of a large facility.

Now, the conversation is about low volume and high density across a large footprint. It’s a relatively new logistics challenge in this scale for healthcare, Ross explains.

“Especially when you talk about a systematized approach where you have not only individual doctors’ offices, but now a system approach for the larger healthcare systems of integrated non-acute locations,” Ross says.

All of that screams complexity. Along with a Consolidated Service Center for its acute care needs, Novant Health formed a non-acute specific team in January 2018 with Ross as its head.

“I’ve been the head of the team since we started, and I have a very small but robust team. We’re still proving the concept of non-acute supply chain. We’re trying to lead that charge in healthcare in the United States,” Ross says.

“For folks in the clinic, nobody does supply chain purchasing or procurement as their sole function at that location,” he says.

The responsibility usually went to a nurse whose second or third collateral duty of the day was to order supplies. Ross and his team approached the discussion as “Supply Chain 101” about the basics.

“Let’s talk about how you’re organized in your space. Are you labeling? Are you ordering? Do you have basic par levels?” Ross asks.

The initiative has since grown into what Ross calls “Supply Chain 201” about supply chain as an integrated entity with multiple chains and channels, and how one location’s actions can affect the others positively or negatively.

“We’ve taken this complex challenge of supplying 600-plus clinics and enabling our end users to be supply chain professionals from a crawl, walk, run model to more conceptual theoretical concepts. At the end of the day, we just want to make sure that means that the understanding between the clinics and our supply chain department remains focused on patient care and cost avoidance,” Ross says.

An enabler to better outcomes
Novant Health does a good job of clinical integration in decision making, especially with large-scale projects or initiatives for products or tests that they may want to introduce, according to Ross. The sourcing team involves doctors, nurses and clinical team members from initiation to adoption to implementation.

“Novant Health’s sourcing team does a fantastic job of aligning with their respective clinical leaders for their different categories and allowing them to help drive the conversation,” Ross says. “We’ll ask, ‘What would be beneficial to you and your patients?’ We as a sourcing supply chain team will do our best to find the appropriate vendor to fill that need.”

“Clinical integration is incredibly key, because then when we’re making decisions and writing contracts with suppliers or manufacturers, we have that warm and fuzzy feeling that this has been looked at and blessed by the folks who will be laying hands on patients,” Ross says. “So, I think we are a direct enabler to better outcomes.”

A recent example of this collaboration involved bringing new lab testing to Novant Health. They used a phased approach to move to molecular lab testing for flu, strep and RSV. The results have been positive.

“This is a conversation that would have been very tough for us to have if we didn’t have a dedicated team to focus on non-acute supply chain,” Ross says.

“But as we know in the lab world, molecular testing really is the cutting edge of technology,” Ross says.

While the new lab testing comes with better outcomes, higher accuracy, quicker turnaround times and can be performed in-clinic, there were other factors to consider, such as a higher cost of disposables and equipment purchases.

“It’s really that discussion between ‘Yes, it’s going to be higher up front, but here’s why it’s worth it,’ and ‘Here’s how our reimbursement makes up that difference and actually provides it a profit or some revenue off of that in the long run.’”

Having a supply chain team drive that discussion helped in the adoption at the clinic level more than it could have two or three years ago. More than half of Novant Health’s clinics have now adopted the molecular lab testing as they phase out the disposables.

“We do anticipate by the end of this year, as we’re in the throes of flu season right now, to be completely phased in with our molecular flu testing,” Ross says.

“I really try to represent all sides of the discussion,” he says. “McKesson, who is our primary lab distributor from a soft-goods and test perspective side, has been fantastic to work with. I think they bring a lot of value, especially to the lab space.”

The entire process to bring in the molecular lab testing was challenging, and in many ways a learning experience. In the non-acute space there’s so much complexity, according to Ross. It’s not just from a logistic supply chain perspective, but also from a clinical perspective and how many different specialties are represented.

“I really learned how much I didn’t know, especially in the lab space,” he says. “But I think that like any healthcare professional, you’re trying to learn and understand what your patients need and what your clinical team members would appreciate.”

Bringing in – and saving – revenue
Supply chain has a unique position within an IDN to not only affect cost savings but to create revenue streams with innovative ideas. For instance, Ross likes the idea of potentially moving retail products to the clinic, especially durable medical equipment. Even things like soft casting or crutches could drive revenue from the clinic level that could benefit a system. More patient interactions occur in the non-acute space.

It’s a concept Novant Health is still evaluating and looking for good benchmarking on as well as ROI potential. Plus, even though it’s considered non-revenue, simply putting money back into the system is still a big deal for supply chain teams.

“Last year, just by improving supply chain efficiencies at the clinic level with basic things like ordering on a set schedule, treating a clinic as if it were our own pantry and not having too much stuff on hand, we were actually able to help avoid over $1 million of potential spend across our medical group last year,” Ross says. “Although technically not revenue generation, giving money back to the organization is almost as important when we look at a multibillion-dollar industry.”

Listen to the entire conversation with Tyler Ross by downloading the Strategies for Success podcast at TBD.