In the office, doctors are trying new approaches to mitigate obesity 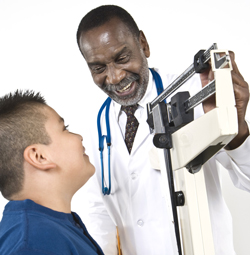 Despite recent declines, the overall prevalence of childhood obesity in the United States is a serious problem, according to the Centers for Disease Control and Prevention. School-aged children and young adults have higher rates of obesity than preschool-aged children, and children in low-income families are disproportionately affected. More than one-third of U.S. adults have obesity.

As new research continues to emerge on the causes, outcomes, and treatment of the epidemic, many doctors are taking new approaches when working with patients to mitigate the problem.

‘Motivational interviewing’
Discussions with patients about obesity have changed dramatically in recent years, says Christopher Bolling, M.D., a pediatrician at Pediatric Associates PSC in Crestview Hills, Ky. Bolling and his colleagues have begun using “motivational interviewing” with patients and parents, a discussion approach that he says is more collaborative than prescriptive.

Recommended by the American Academy of Pediatrics, the technique involves asking open-ended questions to patients. “We spend time helping patients explore how they feel about their own weight, rather than telling them to lose weight,” says Bolling. Noting that weight is a sensitive topic for children and their parents, he sees this approach as a way of exploring what their feelings are before beginning a full-fledged discussion.

With this approach, he has seen families become more open to discussions about the issue. “It’s a way of talking with families so they’re more receptive to the message.”

Similarly, Nitin Damle, M.D., M.S., FACP, president of the American College of Physicians (ACP), has seen a “definite shift” in attention to obesity among patients and doctors, as both groups recognize the risk factors the problem poses, from diabetes, to heart disease, to stroke. Patients are more comfortable discussing obesity with their doctors as long as the conversation is not judgmental and is set in a positive context, he says.

Poverty and obesity
While it is clear that behavioral factors such as diet are important, there is growing evidence that other factors affect the likelihood of a person experiencing obesity. “There’s an emerging understanding that your genetics affect it,” says Bolling. For example, some people have more resistance to the hormone leptin, meaning they are more predisposed to obesity. However, many of these genetic factors are not yet fully understood.

Bolling believes the condition is tied to socioeconomic status more than other factors (like race and ethnicity). For example, doctors in practices where many patients are on Medicaid will see a much higher prevalence of obesity, he says.

In a 2010 study, the American Diabetes Association (ADA) found a correlation between high poverty rates and high obesity rates in the U.S. One factor contributing to this correlation is the lack of access to healthy, affordable food for impoverished Americans. When food security is an issue, “you eat what you can get your hands on,” says Bolling. “Kids will overeat because they’re not sure where their next meal will come from.”
The ADA study also noted higher rates of inactivity in counties where poverty is more prevalent. This inactivity could be the result of less outdoor activity in areas prone to violence, as well as lack of access to parks, sports facilities, and gyms in impoverished areas. “What is unknown is whether reversing poverty would reverse sedentariness and obesity,” the study’s authors wrote. However, “The link between obesity, inactivity, and poverty may be too costly to ignore because obesity-associated chronic disease already accounts for 70 percent of U.S. health costs.”

Teaching healthy habits
As Bolling points out, concepts such as weight and fitness are often described as “contagious.” People are inspired by the environment they are in and the people around them. He says that for younger patients, teaching good habits and promoting healthy lifestyles is important.
“We advocate diet and exercise irrespective of age group,” says ACP President Damle. “The basics of diet and vigorous exercise remain the cornerstone for meaningful weight reduction and maintenance.” He also notes that for patients with morbid obesity, gastric bypass surgery is an option when other measures fail.

Damle also stresses that evidence indicates certain weight-loss programs, such as liquid diets, do not lead to significant or sustainable weight loss. “All studies show reversal of weight loss within a year” after the patient loses weight on those programs, he says.
While Bolling believes that doctors are improving in assessing and discussing obesity, he says they must continue to think about the problem similar to the way they think about other chronic diseases, such as asthma. There will be times when general practitioners need to refer patients to specialists.

He believes that distributor reps can provide valuable service to medical providers by informing them about new advances in nutrition and medical support that help patients achieve a healthy weight. Furthermore, reps can let providers know how products may affect patients, one way or the other, in achieving a healthy weight.

Damle believes reps can provide doctors with more literature, videos, and electronic applications that promote the importance of diet and exercise.

Obesity affects over 12 million American children and adolescents, according to the Centers for Disease Control and Prevention. Christopher Bolling, M.D., a pediatrician at Pediatric Associates PSC in Crestview Hills, Ky., says that motivational interviewing – a technique focusing on creating a more collaborative relationship between doctors and patients – is helpful in addressing the issue. However, he says, “there’s a shortage of opportunities [for doctors] to learn it.”

Users, including doctors and medical students, are placed in a hypothetical clinical scenario in which they pose a question to a family to gauge problems the family might be experiencing that are contributing to obesity. Users are rewarded for asking open-ended questions.
The first version of Change Talk, launched in 2014, had about 30,000 users. A case study from the American Academy of Pediatrics found that 93 percent of physicians surveyed intended to make a change in their healthcare delivery after using it. The Fast Company article notes that in a one-month follow up, 88 percent of those physicians who said they would make a change reported actually having made that change.
“What we’re trying to do is meet the family where they are,” said Bolling. Change Talk 2.0, produced by Kognito, is available for Apple and Android products.