Editor’s note: Chronic diseases and conditions – such as heart disease, stroke, cancer, type 2 diabetes, chronic obstructive pulmonary disease, obesity and arthritis – are among the most common, costly and preventable of all health problems. As of 2012, about half of all adults – 11 million people – had one or more chronic health conditions. One in four adults had two or more chronic health conditions. Seven of the top 10 causes of death in 2014 were chronic diseases. 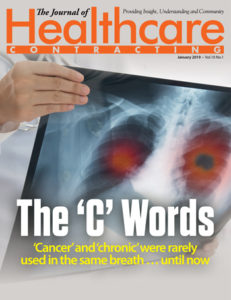 Chronic disease isn’t just for old people. Conditions like osteoporosis can hit much earlier than a person’s golden years, and for former cancer patients, the risk is often higher.

This means caregivers – from primary care doctors to oncologists – must consider more factors now when administering treatment to former and current patients with cancer than they have in the past. It also means they have to coordinate their efforts more closely.

Caring for survivors
“My primary concern is secondary prevention,” says Aarati Didwania, an internist and director of the STAR Program at Chicago-based Northwestern Medicine. STAR – which stands for Survivors Taking Action & Responsibility – serves childhood cancer patients who are now adults, as they transition from cancer care to long-term follow-up care.

Many of Didwania’s patients come to her hoping they’re finished with cancer treatment, she says. They may have been referred by their oncologist, but they’re not actively being treated for cancer. She wants to keep it that way by looking out for any adverse effects they may experience as a result of the treatment they received, which was often years before they arrived at the STAR Program.

Patients aren’t typically screened for many chronic conditions until later in life. But this isn’t the case for patients with a history of cancer. If they received cancer treatment as a child, they may be more at risk depending on how they were treated. Before she meets her patients, Didwania tries to learn as much as she can about their previous treatment, so that she knows what to look for.

For example, if a person received cranial radiation as a child, Didwania might monitor them for hypothyroidism. If they received steroids as part of a bone marrow transplant early in life, they’ll be at higher risk for osteoporosis in young adulthood.

Doctors face a small challenge in reading test results for younger patients, says Didwania. Since those tests were often developed to screen older adults, she has to interpret results in light of the patient’s age.

But the earlier she detects it, the better the outcomes. “I’m a big fan of talking about secondary prevention,” she says. “I can’t take away your past treatments, but I can try to find things before they become a problem.”

Cancer as a chronic disease
“Even though we would like to believe that we cure [cancer] patients with a minimum of side effects, we are learning that cancer causes long-term morbidity,” says Wui-Jin Koh, an oncologist and chief medical officer at the National Comprehensive Cancer Network. The longer patients live, the more time they have to manifest morbidities potentially caused by their cancer therapies. This is partly why oncologists like Koh are particularly concerned about pediatric and young adult patients.

Doctors also focus on quality of life in cancer survivors now more than they did decades ago, he says, referring to “quality-adjusted survival”: “You’re not just surviving; you’re surviving with a good quality of life.” Part of this practice involves considering patient-reported outcomes – factors that weren’t measured as much in the past, like the person’s sexual function, Koh says.

But cancer doesn’t just increase the risk of chronic disease. Sometimes, cancer itself is a chronic disease, or at least very similar to one. “In some cases, we may not be able to completely eliminate a cancer, but patients live longer and have functional lives,” says Koh.

This is especially true as treatment technology advances. For example, breast and prostate cancer patients can undergo continuous therapy, and while their cancers aren’t necessarily “cured,” they can be managed, he says. “In that case, cancer as a chronic disease is maybe more similar to diabetes and other chronic diseases.”

The intersect
Cancer care has traditionally been “somewhat of a silo,” Koh says: The patient gets treated by their oncologist, and other doctors don’t have much of a role in the process. But treatment now is so multifactorial that other providers need to be involved in the patient’s cancer care, he says.

“It used to be that when I saw a referral, I made sure the referring surgeon got a copy of my evaluation treatment plan,” says Koh. Now, he might send that report to the primary care physician, the cardiologist, the endocrinologist and any other specialist the patient might see.

There’s an increased role in cancer treatment for primary care providers, he says. “I don’t think we’ve completely defined all the roles, but I think we’re beginning to evaluate how to educate primary care doctors and how to give them the tools to manage cancer patients.”

He also sees a role for primary care doctors in palliative care – which he clarifies is different from end-of-life care. “I think [palliative care] has gotten this bad connotation,” he says, when really, it’s meant for pain control and maximization of function. He notes that starting palliative care with curative cancer treatment can improve patients’ cure rates.

As all these techniques evolve, says Koh, “I think there will be a lot more communication” between primary care doctors and oncologists.

David Thill is a contributing editor to Repertoire.