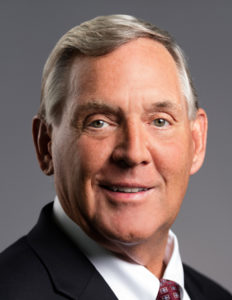 Todd Ebert combined his interest in health sciences and business management to build a 40-year career in hospital and group purchasing organization (GPO) management, most recently as president and CEO of the Healthcare Supply Chain Association, the trade association for GPOs. Ebert will retire from the industry later this year.

Born and raised in Salt Lake City, Ebert received bachelor’s degrees in pharmacy administration and business management, and a master’s in pharmacy administration, from the University of Utah. A registered pharmacist, he began his healthcare career in the pharmacy at St. Marks Hospital and then Pioneer Valley Hospital (now Jordan Valley Medical Center) in Salt Lake City. Already back then, he was impressed by the savings that group purchasing could bring to hospitals. “What you saw relative to the value was huge,” he says. “And it has increased exponentially since then.”

In 1990, he was recruited to manage ValuPharm, the pharmacy membership program of Amerinet (now Intalere) in the territory west of the Mississippi for Intermountain Healthcare. One year later, he moved to St. Louis to become vice president of the national ValuPharm program. He assumed a variety of leadership roles with Amerinet, including executive vice president of contracting operations and senior vice president of marketing and non-acute-care program sales, and was named its president in 1998. In 2007, he became its president and CEO.

He became president and CEO of HSCA in 2015.

From its beginning, the group purchasing industry has evolved to meet and exceed the needs of its provider members, says Ebert. “When I started, group purchasing was all about a competitive price in a contract portfolio. You still need a strong catalog, because sooner or later, someone is going to ask, ‘What’s your price?’ But more important is the ability of GPOs to become strong players and managers in the entire supply chain and beyond.” The data collected by GPOs can be used to affect not only the economic side of healthcare, but the clinical side as well, as it can help providers reduce the variability of certain procedures, he says.

Additionally, hospitals and healthcare providers are increasingly relying on GPOs for a broad range of services integral to cost-effective patient outcomes, including shortages, emergency preparedness and disaster response, drug utilization and healthcare cybersecurity.

Group purchasing has gone through its set of challenges. “In 2000, when dot-coms were coming on strong, there was a feeling that GPOs could become a thing of the past,” he recalls. “But we have continued to evolve and enhance our value to our customers and their patients.

“I’ve always said, listen to your customers. If you don’t, someone else will. Then provide the best value you can to meet their needs. To do that, you have to be strategic and nimble.”

These are lessons he learned first from his parents, Ray and Grace Ebert. “They taught me the value of ethics, of doing the right thing, of working hard and accepting responsibility and accountability,” he says. And he credits Bud Bowen, industry consultant and himself one-time president of Amerinet, with teaching him about group purchasing and about how to conduct oneself in business. “First of all, values are important to Bud,” says Ebert. “Number 2 is Bud’s business acumen. And Number 3 is something I call the fairness principle. For an agreement to be a long term success, everyone must be able to shake hands, confident that it works for all involved.”

“What about those #@$@#!! drug-makers who are pillaging our healthcare system?”

Given his background in pharmacy and group purchasing, Todd Ebert has come to expect such questions from friends and neighbors. “My response is twofold,” he says.

“The industry needs a robust and competitive generic drug marketplace. We have to make sure we have plenty of competition with a fair return on products, so consumers have access to high-quality generic medication.

“However, when we get into the discussion of patent-protected products, I remind people of the new drugs and products that are just fascinating; and I think pharmaceutical research is on the cusp of doing more. Pharmaceutical firms deserve a return, as long as it’s fair. We want to make sure they don’t game the system by artificially lengthening patent protection, and we need to ensure safe and affordable access to life-saving treatments through biosimilar drugs.

“There has to be a fair return, but not one that’s excessive.”